Groups, VCAs, Aux Subgroups and Folders - they all serve roughly the same function, so does it matter which one you use? The different grouping techniques are unexpectedly complex when you start to think about their possibilities and limitations in detail.

In this article we'll compare the different types of groupings and take a look at what they can do for the workflow and organization in your projects.

A Folder group works similar to the way folders are organized on your computer. One track is designated as "parent", and all tracks placed underneath this folder track will be designated its "children tracks". The audio of the children tracks will be summed together and pass through the parent before it reaches your DAW's master.

Tracks organized in a Folder structure.

VCA stands for "Voltage Controlled Amplifier" and is another way to group tracks together in a DAW. We'll look at the meaning of the name some other time. What you need to know however is that this relationship consists of a "VCA Master" track and "VCA Slave" tracks. All the alterations you do to the master track - moving the fader, solo/mute, panning etc. - will also happen to all the tracks designated as slaves to the master.

With both VCAs and Folders, you can adjust the balance of the individual faders in the group and then control the overall level of this balance with the seperate VCA or Folder fader.

VCA only controls the mechanical faders of the individual tracks within the group, while Folders become the bottleneck for the audio of these tracks.

In practice, that means you can process a Folder with audio effects, and it will affect the sum of the tracks within it. Processing a VCA master track won't do anything, because there's no sound passing through it.

Moving the Folder fader also won't move the faders of its children tracks.

Tracks in a Group will have their faders, solo/mute buttons, and possibly other stuff as well, linked together, so that if you move one of them, you move all of them.

Below is an illustration of the Group function. For Track 1 - 7, the level fader, pan pot, mute and solo buttons have been linked together (denoted by the red triangles). That means that when you move the fader of Track 1, Track 2 - 7 will also have their faders moved by an equal amount. Compare to the Mix track, which has none of this functionality. The second picture is the same as the first picture, except I moved the fader of one of the tracks up by roughly 8 dB. The result: All of the grouped tracks have their faders moved by 8 dB. 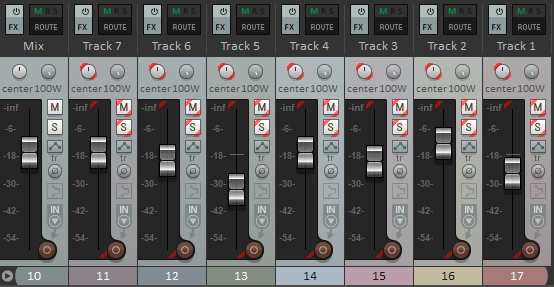 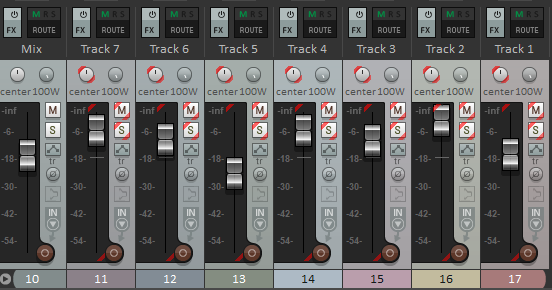 This is similar to the operation of a VCA, except when you use VCA, you have a seperate track for controlling all these tracks. In a Group however, every track controls all the tracks!

Like with the VCA, you can not group process with a Group, since these grouping techniques are both mechanical, meaning that they only control the mechanical faders, and do not actually do anything to the sound themselves.

You can also send the signals from tracks in your project to another track. This is what we call sending to an Aux Subgroup.

Track 1-7 below are all sent to the Aux. where they are summed before being sent to the DAW master. Notice the small, blue S letter on Track 1-7 and the yellow R on the Aux. These stand for Send and Recieve respectively.

Folders and Auxes are extremely similar, since audio passes through both of them. With an Aux however, you can place it wherever you want in your DAW project independently of the tracks that are sent to it. It's just another track, whereas if you move a Folder, all its «children» tracks will move with it.

Also, there's the visual cues that these do differently: With Folders, it's really intuitive to understand the structure or sub-structure, indeed the hierarchy, of a project – because Folders are visually organized in a «tree structure» – while Aux Subgroups are visually organized in a «flat» structure and on the same level as the tracks that send to it, and are therefore harder to understand at a glance, but they're more flexible.

As far as I know, Logic, Pro Tools, Ableton++ do not have Folders, while Logic and FL Studio don't have Groups. Reaper, Cubase++ do have Folders.

Subgroups seem to be the most used technique across the board, at least nowadays, for mixing. It's applicable in most situations, and like with VCA and Groups, it stems from functionality of ye olde mixing desks, and therefore it is conventional workflow. VCAs and Groups seem to be used in more special case scenarios.

Folders on the other hand is a newer design that came with the digital revolution and personal computers. They are not as widely implemented, but very useful and can make for less cluttered projects, and they may be more intuitive. The way I see it, they are an alternative to Subgroup Auxes.

So when should you use what?

Subgroup Auxes and Folders are for when you need to process multiple tracks with the same processing. They save your computing power, and your time. They are therefore great as instrument group busses.

There's also the possibility of parallel processing. You can send a copy of your audio to an aux and add processing to it, so you get both the unprocessed and the processed audio at the same time.

Groups are handy when recording and editing, because they let you select the whole group of audio clips at once automatically. Split one audio clip in two, and you split all of them in the same place. Drag one audio clip, and you drag all of them by the exact same amount.

VCAs on the other hand are nice when you don't need to process the audio on a group level, but you still want to control their overall level while retaining the ability to adjust the balance inside the group.

For example: Say you're close to clipping into the master because your tracks are becoming unexpectedly hot: You can just lower the overall levels of the tracks with a single fader without upsetting your finely calibrated balance by having all the audio tracks in your project set as Slaves to a VCA Master track.

I also find VCAs useful for controlling my reverb and delay busses. I can control them seperately, but I also enjoy the ability to turn it all off with the touch of a button to check the mix dry, among other things.

There's a final subject of combining the various groupings together for even more power, but it's a complex subject I haven't fully wrapped my head around yet, so I'll leave that for another time.

In the mean time, I hope you can use this information to enhance your workflow.